The Tsilhqot’in (Chilcotin) or “People of the River” are comprised of 6 traditional communities whose territories cover an area between the Fraser River and the Coast Mountains in west-central BC. This vast rugged wilderness remains host to one of the most pristine salmon ecosystems in the Pacific Basin, including the Chilcotin River and its headwaters the Chilko and Taseko Rivers all flowing into the Fraser River, as well as the headwaters of the Homathko, Kliniklini, and Dean Rivers that flow west off the coast mountains. Salmon production from this area is predominantly sockeye from the Chilcotin River and it’s tributaries, but also includes chinook and coho salmon, and represents a significant proportion of the salmon fishery of the Fraser River.

The Chilcotin River sockeye has been an integral component of Tsilhqot’in culture for centuries.

These fisheries aim to uphold the importance of fish conservation by engaging in sustainable, responsible selective fishing practices that help to maintain salmon stock diversity while protecting the weaker salmon stocks.

Tsilhqot’in Select salmon and salmon products are harvested for a limited commercial fishery only once adequate numbers have returned to the spawning grounds, and only after community needs for food, social and societal purposes have been met.

Tsilhqot’in traditional community life is a highly prised value. It embraces a sense of belonging, acceptance, sharing and respect for its individuals and families because it nurtures trust and interdependence and foster strong communities, families necessary to survive in this beautiful but rugged countryside. The salmon fishery is an integral part of the traditional Tsilhqot’in community. Fishing season here typically occurs between mid- August and early-September.

This productive salmon fishery once made this area a trade hub between coastal and inland First Nations; trade goods were reportedly shared with coastal grease trails to the west and come from as far east as the Cree Nation (James Bay). The traditional technology of wind drying salmon was the preferred way to preserve salmon until the next season, and it was so easy to pack it became a preferred trade currency throughout the Tsilhqot’in trade routes. Early explorers and settlers depended upon trade in this dried salmon to survive harsh winters.

Although a variety of alternative selective fishing tools may be used in modern Tsilhqot’in fisheries, most  still prefer traditional dip-nets. Many of the same dip-netting spots date back thousands of years, and modern commercial fisheries are required to defer traditional fishing sites to those fishing for food, social and societal purposes, separating themselves in time and location to minimize any disruption to traditional activities.

Dip netters typically enjoy safety in numbers, and the labour-intensive fishery demands labor sharing in operating the dip-net as well as packing fish up-hill from deep in the river canyons. Usually the fishery operates at night when cool evening waters and darkness draw migrating salmon against the canyon walls and to the top of the water column. It also makes the dip-netters less visible to their prey. Tsilhqot’in songs provide cadence to the regular rhythm of dip-netters, and it is easy to imagine how little this technology has changed for thousands of years. Traditional dry racks that are used to wind dry the salmon still occupy Farwell Canyon each August, and an abundance of community  wind-drying racks back home are both a sign of prosperity and cultural survival.

Traditional dip-net construction has been passed down through the centuries and is still preferred to store-bought nets for their superior performance in the Tsilhqot’in river fisheries. Just the right size of sapling juniper or pine are shaped into the characteristic tear-drop shape of the hoop while still green, then dried and fastened with chord onto long smooth pine poles capable of reaching from the canyon walls well into the swift currents that carry the migrating salmon. Traditional nets are fastened to the hoop using bone rings that allow the net to collapse on the trapped fish when the operator releases a guide-string that spans the length of the pole. Undulating currents and powerful salmon are capable of escaping the dip-net without this feature. Often fishers are held by safety ropes to the canyon walls in case they lose their footing, although history is marked with too many drowned fishers who have succumbed to such accidents. In contemporary commercial fisheries, the dip-net fishers follow strict safety protocols, drawing from the same safety systems as professional climbers.

Co-management agreements have been developed between Fisheries and Oceans Canada and the Tsilhqot’in National Government (or TNG). TNG was created in 1989 to help Tsilhqot’in Communities in their development through the use of a strong cultural and spiritual base, the understanding of traditional values and beliefs, and through the development of positive attitudes and skills while balancing contemporary and traditional life styles. For more information on the TNG and the management of their fishery see: 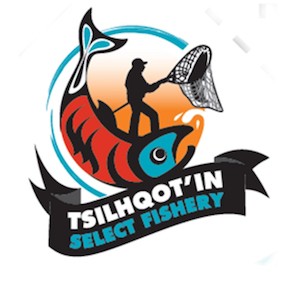 The Tsilhqot’in Select Fishery logo was inspired by the traditional dip-net technology. The stylized salmon is showing the first signs of maturation 350 kms from Georgia Strait, white water is a taste of the Chirn Creek and Chilcotin River rapids, while the sunset backdrop to the salmon portends a successful evening start to the fishery.

Raven is the culture hero of the Chilcotin and other Northwest Coast tribes. He is a benevolent, respected figure who helps the people by bringing them sunlight and salmon, but at the same time, he is also a trickster character and many Raven stories have to do with his frivolous or poorly thought out behavior getting him into trouble.